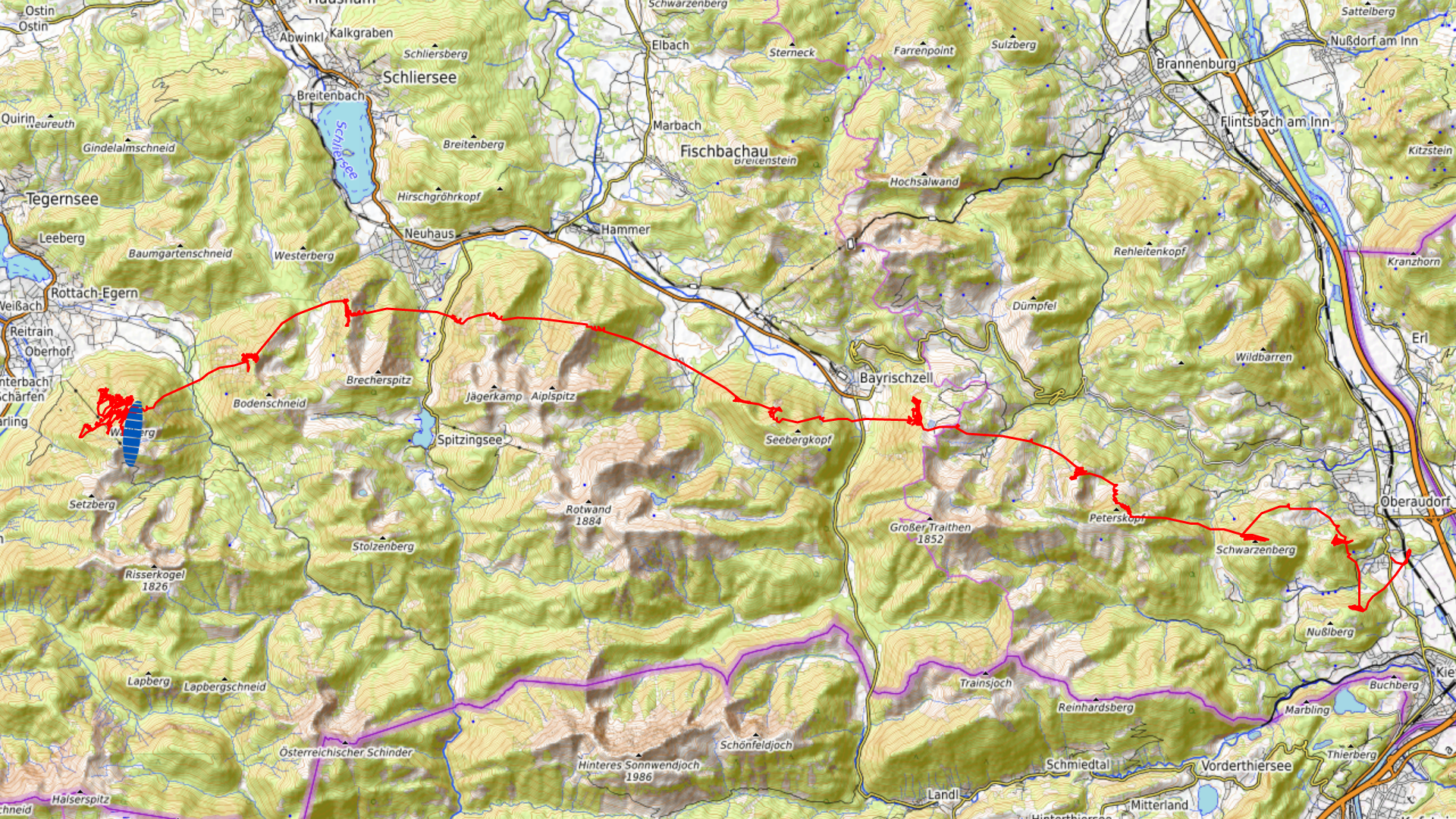 A flight from Brauneck to Kössen is a dream for many. But the wide Inn valley with its strong valley wind is a real hurdle. That’s how it should be on my first attempt to fly to Kössen.

Planning: The plan was, as Ferdi Vogel suggested, a 100 km FAI triangle, which first leads east towards the Inn Valley, then west in the Inn Valley and back via the Achensee to the Wallberg. Because of the strong predicted westerly wind, Erik and Georg thought it would be quite difficult, so I simply planned a flight, like the other two, to the east one way.

Before the start: As already written above, I met Georg and Erik from the Bodenlos e.V.. We agreed on a PMR channel so we could keep in touch.

11:47: Takeoff from the Alm launch site went smoothly, the wind came from the north-west, as predicted.

12:21: After that it became much more difficult, I couldn’t really center the existing thermals, so I had a longer fight on Wallberg before I flew on to Bodenscheid. Erik was also on the Wallberg for quite a while, Georg flew on towards Bodenscheid very quickly, where he also had trouble finding thermals. Sometimes a yellow Alpina 4 flew with me

13:12: You can see the Schliersee in the picture. Due to the strong westerly and at times northwesterly winds, it was always easy to soar and thermally climb up.

13:14: The Jägerkamp and in front of it the Nagelspitze where some pilots were ready to start.

13:35: The Wendelstein and below right Bayrischzell.

14:35: Unfortunately, I didn’t gain enough altitude over the Sudelfeld, so I arrived at the Inn Valley very low. I was still hoping to find something here, but unfortunately it wasn’t confirmed.

14:48: After a long fight, I landed on the meadow south of Mühlbach in the middle of the picture without any problems.

Departure: Immediately after landing, a young couple took me to Oberaudorf train station. After a wheat beer and meat loaf in the train station, we took the Bavarian train straight back to Munich.

Lessons learned: In order to cross the Inn valley, a much greater height must be cranked up over the Sudelfeld. Georg, for example, was there at an altitude of 2200 m.

Summary: Another nice flight, even if the day gave more, it didn’t annoy me to be went down

The Zillertal – a valley full of overhead power lines

All Quiet on the Western Front