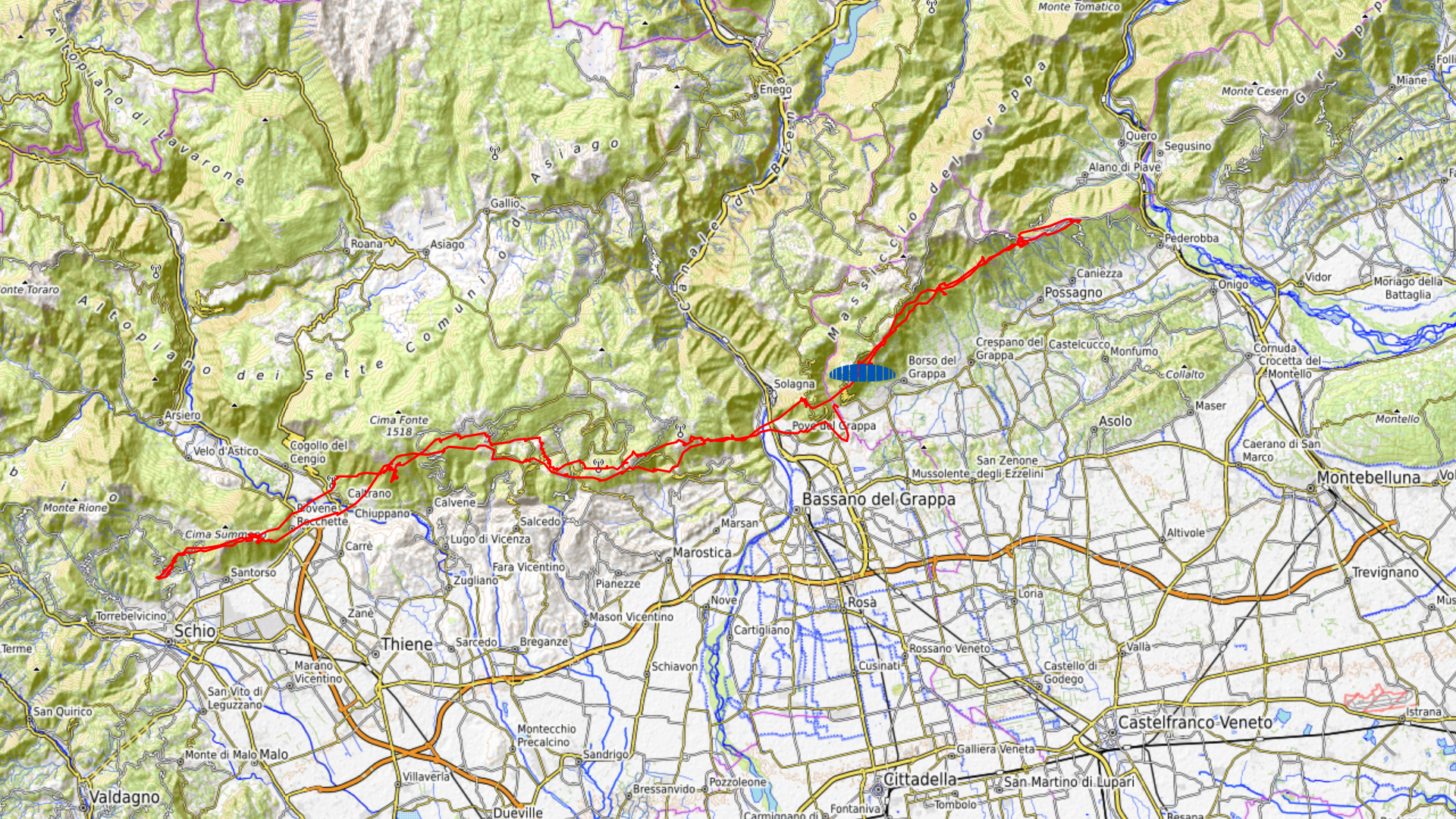 Bassano del Grappa, not only the place for the famous Schnapps, but also a famous place to fly all year around

Planning: Since I at least flew over the Fiume Astico yesterday, I wanted to go one step further today and crack the 100 km together with Gerhard. According to Burnair, the thermals should start as early as 10:00, below 2000 m light southerly wind. Strong north winds are to be expected from 2000 m, the thermals should reach up to 2000 m. But since we haven’t been much higher than 1600 m in the last few days, the predicted thermal height is not really relevant.

11:29: We reached the eastern turning point together quite quickly.

11:47: Together with a glider pilot, we looked for thermals and found them. But he got pretty close to us at times.

12:30: The westbound flight progressed quite quickly. Unfortunately I lost sight of Gerhard, who was a lot faster and higher than me.

13:37: Before the Fiume Astico crossing I was able to turn up to 1550 m, so that I was confident to make the crossing.

13:49: That’s how it was then, on the Cima Summano I was slowly but surely able to gain height again.

14:03: A bit surprised by the landscape that presented itself to me, I didn’t know which route I should fly best. The logical route would be to fly along the pass between Cima Summano and Monte Rozzo Covole, but because of the strong southerly wind, the fear of coming down leeward of Cima Summano and the area in front of the pass being heavily wooded, I flew further south.

14:14: To make the 100 km I would have had to fly further northwest. But again because of the strong southerly wind I didn’t dare to take this route because I might not have gotten out against the wind. So I decided to fly back.

14:30: I set the crossing at a height of just over 1200 m, but it was still enough because I found thermals in between.

Lesson learned: With better flight preparation, I would not have been so surprised by the landscape at Cima Summano and would have managed the 100 km.

Summary: Nevertheless, it was a great flight, my longest so far 🙂

Flight details: Check out at XContest