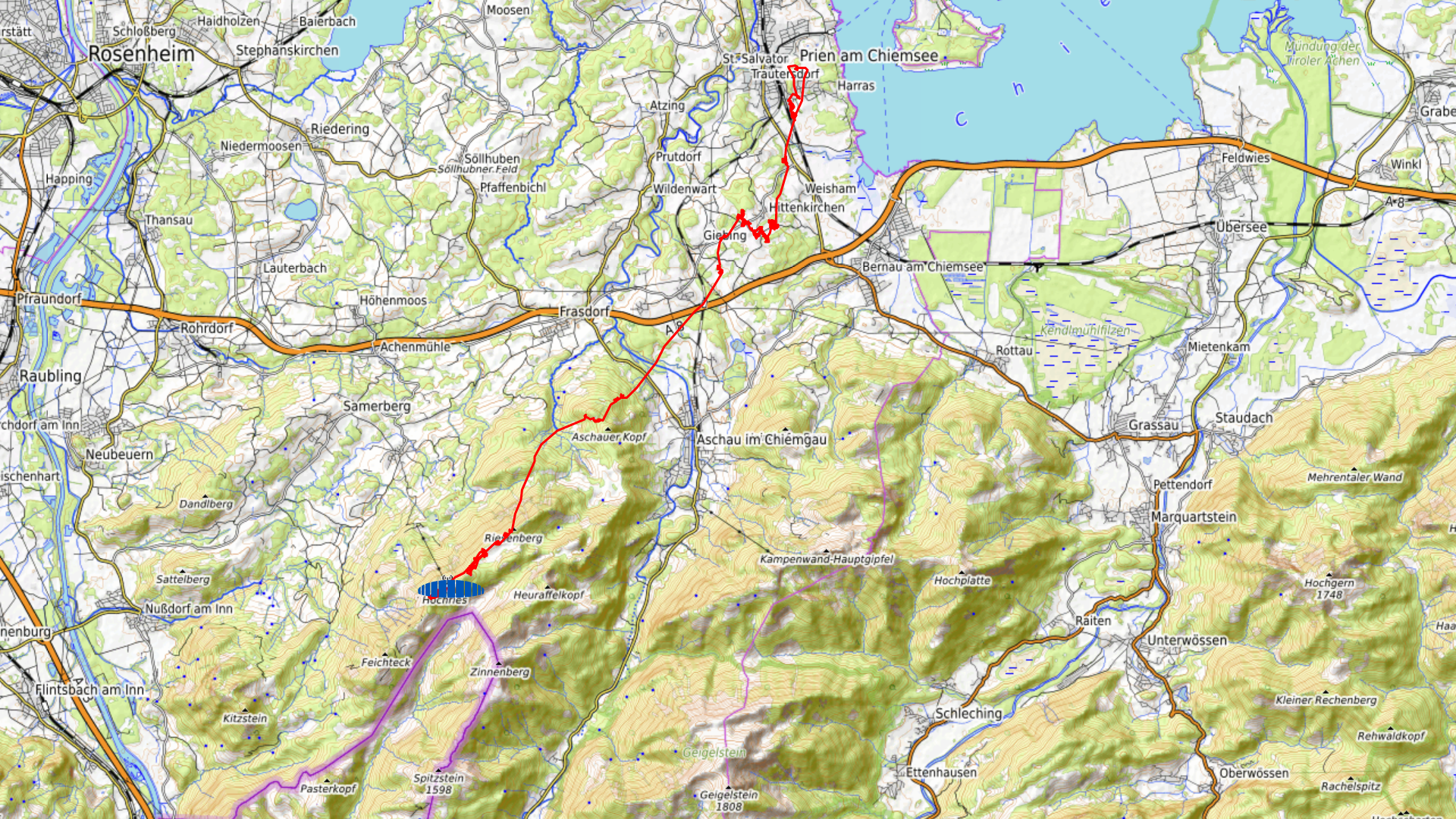 Even if you live near the mountains, it is still very exciting to fly in the flat. A classic is to fly around the Chiemsee.

Planning: Since a no-fly zone was set up by the G7 summit in Schloß Elmau around Garmisch-Patenkirchen up to Munich, and light northwesterly winds and good thermals were predicted for the foothills of the Alps, I decided to try the Chiemsee round from Hochries.

Before the start: At the Hochries summit (not the G7 summit 😉 ) I met some Bodenlose ones, including Uli, Philipp, Max, Charles. We agreed on a common PMR frequency, which unfortunately was changed again at short notice. I didn’t notice anything about the change, so I was on my own in the air.

12:51: After a bit of waiting in the pilot line, the takeoff was easy, as there was a light north-west wind.

11:57: Only with moderate thermals did it slowly go up. I slowly felt my way over the north-west facing mountain range of the Hochries. Under the cloud, the thermals also increased, so I hurried to fly to the windward side of the cloud.

12:14: On the way to Lake Chiemsee, two pilot machines crossed the course at high altitude. Difficult to estimate the distance between the paraglider flying above me and the planes.

12:38: Finally arrived west of the Chiemsee, but on the way there I unfortunately had a massive sink, so I arrived very low in Prien.

12:54: I was still hoping for a lowsafe south of Prien, but unfortunately I didn’t find any really usable thermals, so I had to land on the meadow at the bottom left of the picture.

Departure: I met my club colleagues Philipp and Max at the Prien train station. We took the train to Rosenheim, from there we should take the train to Raubling, since Max has his car there. Unfortunately, we missed the train, so we took a taxi to Raubling for €20, from where Max took me to the Hochries-Bahn car park. Thank you for this.

Lesson learned: I have no idea, this time I was very patient and tried to crank out the thermals to the end. Maybe it was just bad luck that I fell into such a large area. As it turned out later, a few more from my club were drowned here in the area or further north.

Zusammenfassung: Another short and nice flight. Flying in the lowlands has its own fascination. I will definitely try the Chiemsee circuit again at the next opportunity.