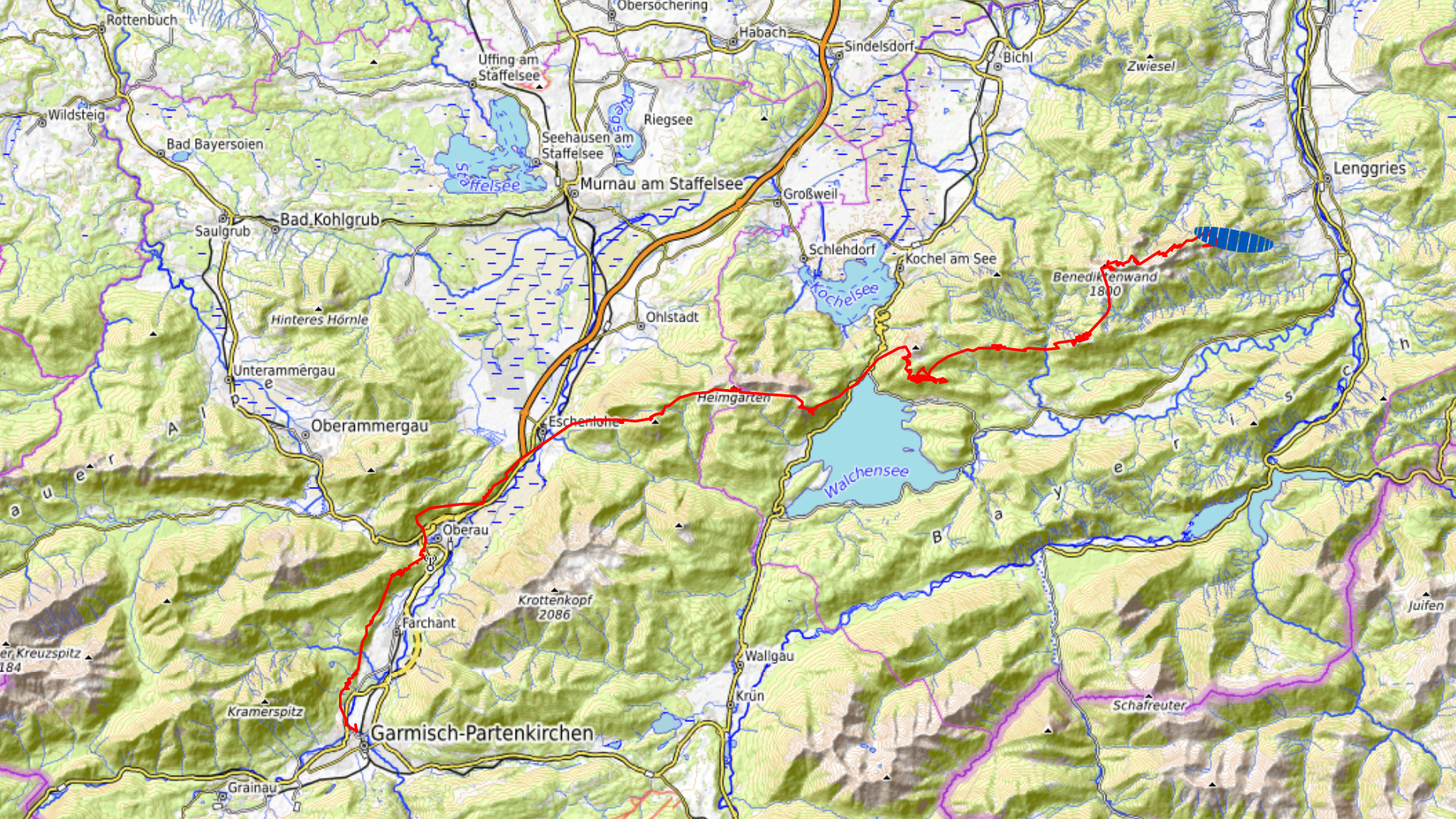 To say it straight away, the yellow angel didn’t appear to me to help with a breakdown.

Prologue: The thermal forecasts give rise to the assumption that another Karwendel triangle could be attempted. But as the number of subjunctive moods suggests, I didn’t really believe in it. Stefan, who kindly picked me up from Holzkirchen after the S-Bahn arrived there late and I missed the connection, was very fixated on the triangle. He was keen to try as southerly winds were forecast, a thing that doesn’t happen that often in the Northern Alps. We picked Erik up in Bad Tölz, since the BRB could no longer continue from Schaftlarn due to, as Deutsche Bahn quoted it, “lack of tracks”.

Planning: Since I didn’t really believe in the Karwendel triangle, I didn’t carry out any detailed planning.

Before the start: We heard Ralf over the radio, who had already started before we arrived . At 11:00 a.m., the ATIS Innsbruck had not yet reported any activation of the TRA Charly, which is rather unusual. Probably because of low hanging clouds. Later, during the flight around 12:00 p.m., I called up the ATIS again, and then it was finally there, the activation.

Start: Even though I carried less extra weight, around 2.5 kg, the start is noticeable harder to do. But thanks to an ideal southerly wind of about 10 km/h, there were no problems.

11:46: A somewhat strange behavior that the Alpina 4 suddenly shows, even a small turbulence was enough to bring the left ear to fold in stably. I had to pull the ear again to unfold it by repeatedly braking. The same should happen again later. I couldn’t see any visible damage.

11:58: As mentioned above, I listened to the ATIS again during the flight, now the TRA Charly was finally activated. Ralf, who had already landed, confirmed this to us over the radio.

12:00: Stefan from above with his orange PHI Maestro. At this point we were over the Jachenau. The thermals were only very good in certain areas. Not enough for me to fly around the Karwendel triangle, so I just decided to fly further west.

13:07: After a long fight on the Mitterberg, east of Walchensee, I finally went on to the Herzogsstand. From the Jochberg I was alone in the air, with the exception of this flying colleague here in the middle of the picture. When flying past the Walchensee, I thought about flying towards Lake Starnberg, but there were only a few or no clouds to be seen.

13:12: The Herzogsstand was well attended with hikers.

14:14: Maybe hard to see on the photo, here I was surrounded by an ADAC helicopter (in Germany so called “The yellow angel”). You could clearly see that he flew a curve, but is the pilot really aware of the dangers to us paragliders from the down wash? Since we were about the same level, I figured there shouldn’t be any trouble from turbulence crossing his trajectory.

Landing: That’s how it was, the flight to Garmisch-Partenkirchen went smoothly, I landed north of the city.

Depature: I went back with the rail replacement service to Murnau and from there quickly with the regional train to Munich, so that I was home at 5:00 p.m. in time for lunch.

This website uses cookies to improve your experience while you navigate through the website. Out of these cookies, the cookies that are categorized as necessary are stored on your browser as they are essential for the working of basic functionalities of the website. We also use third-party cookies that help us analyze and understand how you use this website. These cookies will be stored in your browser only with your consent. You also have the option to opt-out of these cookies. But opting out of some of these cookies may have an effect on your browsing experience.
Necessary Always Enabled
Necessary cookies are absolutely essential for the website to function properly. This category only includes cookies that ensures basic functionalities and security features of the website. These cookies do not store any personal information.
Functional
Functional cookies help to perform certain functionalities like sharing the content of the website on social media platforms, collect feedbacks, and other third-party features.
Performance
Performance cookies are used to understand and analyze the key performance indexes of the website which helps in delivering a better user experience for the visitors.
Analytics
Analytical cookies are used to understand how visitors interact with the website. These cookies help provide information on metrics the number of visitors, bounce rate, traffic source, etc.
Advertisement
Advertisement cookies are used to provide visitors with relevant ads and marketing campaigns. These cookies track visitors across websites and collect information to provide customized ads.
Others
Other uncategorized cookies are those that are being analyzed and have not been classified into a category as yet.
SAVE & ACCEPT