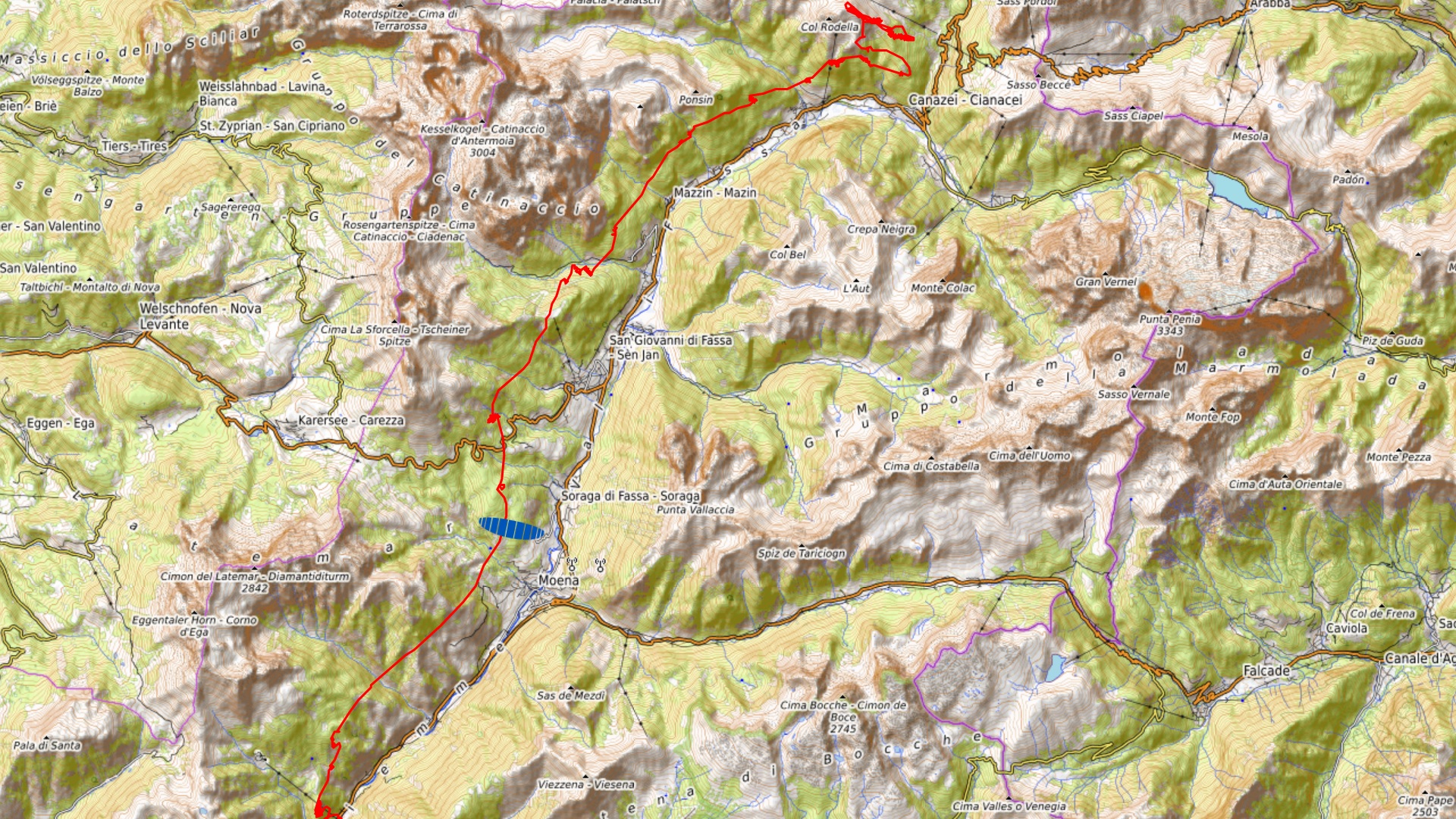 Sometimes choosing a suitable place to land isn’t that easy, but if you want to fly cross country you can’t be so choosy. This time I had to land between a high and medium voltage overhead line

Prologue: A week’s holiday in the Dolomites with my wife. The hope that one or the other flight day could jump out was confirmed on the first day after arrival. Good thermals with a base of up to 3400 m in the late afternoon with a light north-west wind were forecast.

Planning: The Col Rodella, probably the best-known flying mountain in the heart of the Dolomites, seemed to me to be the most suitable flying mountain, since you can fly along a south-east flank in the morning. The first turning point at the Col de Ciampac, then direction Marmolada and then fly back to Campitello.

Before the start: Very international pilot audience, I could make out voices from France, Switzerland, of course Italy and German. Two hanggliders were also getting ready to take off. Since the thermals are stronger and the Fassa Valley is known for the strong valley winds, I took about 3 kg of additional ballast with me.

Start: At 11:34 start heading east, despite the predicted westerly wind

12:06: I had the misfortune that I started exactly in a large-area shadow, so it was rather slow or not at all up. At some point I decided to fly south-west.

12:38: Here I got into a strong thermal, the only place where it got too strong for me and I was happy to be out of the thermal again. The day after that I came back in the same place in strong thermals, I have no idea why here of all places.

13:00: From here it was unfortunately only downhill, no more thermals found.

13:12: I had considered flying south of Monte Mulat to use it as a crash slope. Would certainly have worked, since the wind was displayed at 18 km/h in the meantime. But I didn’t see any possibility of outlanding there and since the valley is very narrow here, I decided to concentrate on the landing.

Landing: As can be seen in the picture, the landing took place between a high and a medium-voltage overhead line, ultimately without any problems, but still “exciting” in the truest sense of the word

Departure: I went back to Campitello di Fassa by bus and from there by mobile home to Wolkenstein.

The Pinzgauer walk – probably not that easy after all

Paragliding at the Dune 45, Sossusvlei, Namibia

This website uses cookies to improve your experience while you navigate through the website. Out of these cookies, the cookies that are categorized as necessary are stored on your browser as they are essential for the working of basic functionalities of the website. We also use third-party cookies that help us analyze and understand how you use this website. These cookies will be stored in your browser only with your consent. You also have the option to opt-out of these cookies. But opting out of some of these cookies may have an effect on your browsing experience.
Necessary Always Enabled
Necessary cookies are absolutely essential for the website to function properly. This category only includes cookies that ensures basic functionalities and security features of the website. These cookies do not store any personal information.
Functional
Functional cookies help to perform certain functionalities like sharing the content of the website on social media platforms, collect feedbacks, and other third-party features.
Performance
Performance cookies are used to understand and analyze the key performance indexes of the website which helps in delivering a better user experience for the visitors.
Analytics
Analytical cookies are used to understand how visitors interact with the website. These cookies help provide information on metrics the number of visitors, bounce rate, traffic source, etc.
Advertisement
Advertisement cookies are used to provide visitors with relevant ads and marketing campaigns. These cookies track visitors across websites and collect information to provide customized ads.
Others
Other uncategorized cookies are those that are being analyzed and have not been classified into a category as yet.
SAVE & ACCEPT