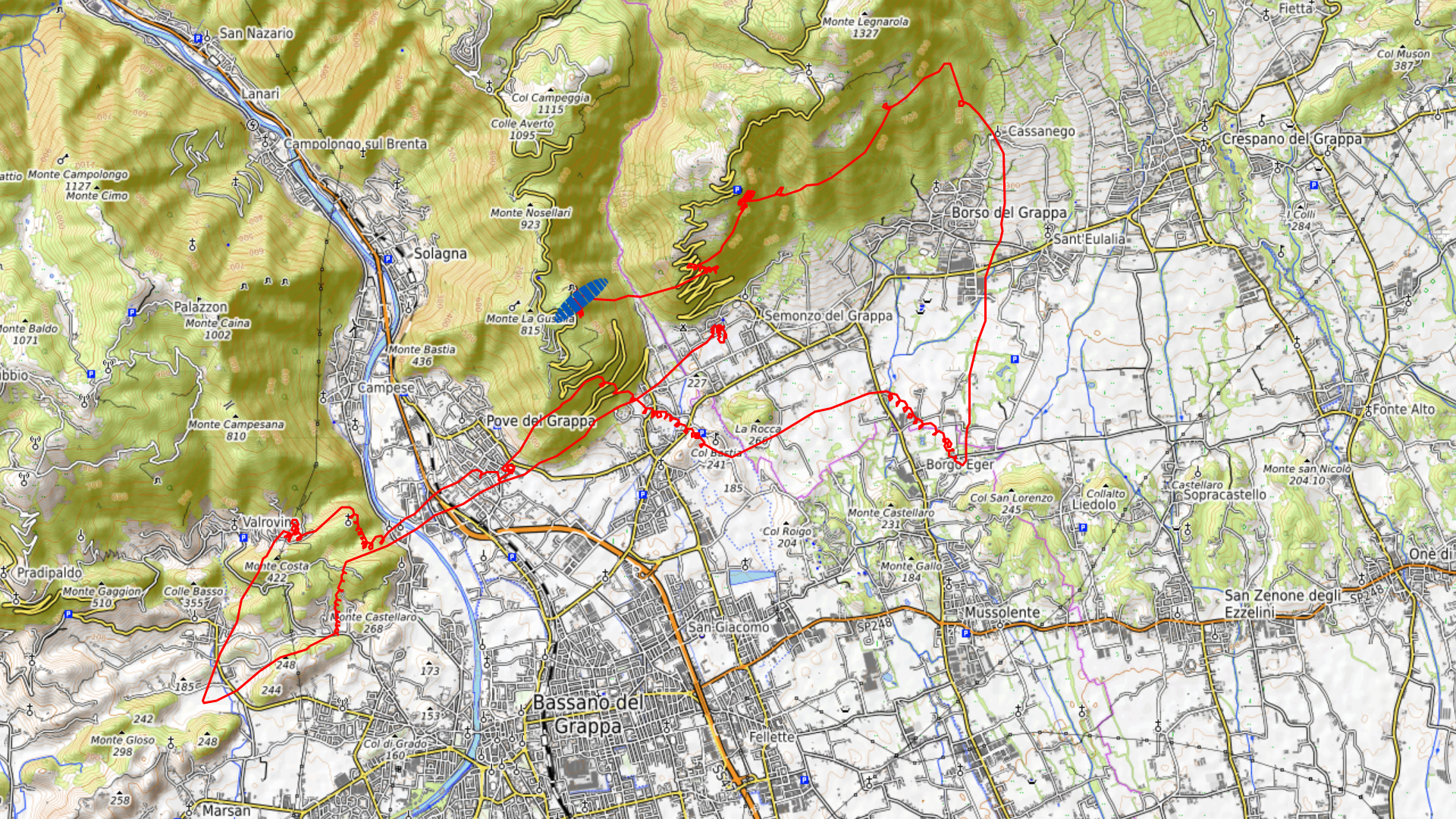 Planning: no planning carried out, as thunderstorms were already expected for 1:00 p.m. to 2:00 p.m

11:04: The start wasn’t the best, two collapses (left, right), although the conditions were manageable. Strong wind from the southeast, but nothing that would actually contradict a good start

11:08: Moderate gentle climb at the beginning. Monte Grappa is already covered in clouds. It is also noticeably increasing in the west

11:28: Cautious approach to the east, observing what the clouds are doing. I could see someone, probably in a seat harness and low-B wing, under the clouds trying to flap their ears. I’ll probably never quite understand how you can voluntarily get yourself into trouble like that. Later he sensibly flew out into the flat

11:33: Since I wasn’t quite sure about the thing, I decided to fly into the flat. Second strong climb in straight flight

11:44: Climbing is not so productive on the flat, so back towards the Costalunga antenna. I’m not too sure about the rather complex airspace structure east of Bassano either, so I’m cautious here too

12:12: The group of Trofeo Montegrappa flew west of the Brenta over the mountains. They can certainly not be impressed by the mighty dark clouds

12:23: It was always cloudy west of the Brenta, hence my decision to fly back to the landing field

Lessend learned: As written the day before yesterday, due to the bad start, ground handling is necessary

Conclusion: Short but beautiful flight, due to the latent risk of thunderstorms, it was really early to land. At 4:15 p.m. there was thunder and lightning, but no rain yet

This website uses cookies to improve your experience while you navigate through the website. Out of these cookies, the cookies that are categorized as necessary are stored on your browser as they are essential for the working of basic functionalities of the website. We also use third-party cookies that help us analyze and understand how you use this website. These cookies will be stored in your browser only with your consent. You also have the option to opt-out of these cookies. But opting out of some of these cookies may have an effect on your browsing experience.
Necessary immer aktiv
Necessary cookies are absolutely essential for the website to function properly. This category only includes cookies that ensures basic functionalities and security features of the website. These cookies do not store any personal information.
Non-necessary
Any cookies that may not be particularly necessary for the website to function and is used specifically to collect user personal data via analytics, ads, other embedded contents are termed as non-necessary cookies. It is mandatory to procure user consent prior to running these cookies on your website.
SPEICHERN & AKZEPTIEREN